An Overview of Babylonian Mathematics

A.1 Introduction to Babylonian Mathematics

The Babylonians lived in Mesopotamia, a fertile crescent between the Tigris and
Euphrates rivers. Here is a map of the region where the civilization flourished.

clumsy methods of arithmetic with addition, subtraction, multiplication and division
all playing a part. The Sumerians, however, revolted against Akkadian rule and by
2100 BC they were back in control.

The Babylonian civilization, whose mathematics is the subject of this article,
replaced that of the Sumerians starting around 2000 BC. The Babylonians were a
Semitic people who invaded Mesopotamia, defeated the Sumerians and by about
1900 BC established their capital at Babylon.

The Sumerians had developed an abstract form of writing based on cuneiform
(i.e. wedge-shaped) symbols. Their symbols were written on wet clay tablets which
were baked in the hot sun. Many thousands of these tablets have survived to this
day. It was the use of a stylus on a clay medium that led to the use of cuneiform
symbols since curved lines could not easily be drawn. The later Babylonians adopted
the same style of cuneiform writing on clay tablets. A picture of one of their tablets
Babylonian mathematics is to the right.

There are several Old Babylonian mathematical
texts in which various quantities concerning the digging of a canal are asked for.
They are YBC 4666, 7164, and VAT 7528, all of which are written in Sumerian ...,
and YBC 9874 and BM 85196, No. 15, which are written in Akkadian ... . From the
mathematical point of view these problems are comparatively simple ...

The Babylonians had an advanced number system, in some ways more advanced
than our present systems. It was a positional system with a base of 60 rather than
the system with base 10.

to make multiplication easier. Even better is their formula

which shows that a table of squares is all that is necessary to multiply numbers,
simply taking the difference of the two squares that were looked up in the table then
taking a quarter of the answer.

Division is a harder process. The Babylonians did not have an algorithm for long
division. Instead they based their method on the fact that

so all that was necessary was a table of reciprocals. We still have their reciprocal
tables going up to the reciprocals of numbers up to several billion. Of course these
tables are written in their numerals, but using the sexagesimal notation we introduced
above, the beginning of one of their tables would look like: 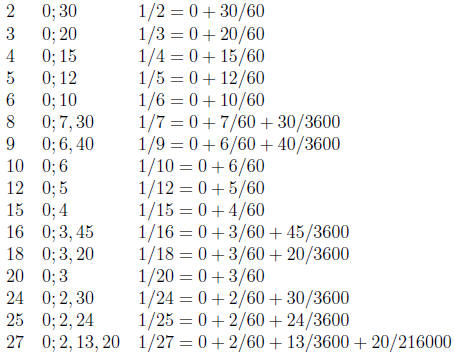 and these values, for example 1/90, were given in their tables. In fact there are
fascinating glimpses of the Babylonians coming to terms with the fact that division
by 7 would lead to an infinite sexagesimal fraction. A scribe would give a number
close to 1/7 and then write statements such as

... an approximation is given since 7 does not divide.

Babylonian mathematics went far beyond arithmetical calculations. We now ex-
amine some algebra which the Babylonians developed, particularly problems Babylo-
nian mathematics which led to equations and their solution. The Babylonians were
famed as constructors of tables. Now these could be used to solve equations. For
example they constructed tables for n3+n2 then, with the aid of these tables, certain
cubic equations could be solved. For example, consider the equation

Note that we are using modern notation, and nothing like this symbolic representation
existed in Babylonian times. The Babylonians could handle numerical examples of
such equations. They did this by using certain rules, which indicates that they did
have the concept of a typical problem of a given type and a typical method to solve it.
For example in the above case they would (in modern notation) multiply the equation
by a2 and divide it by b3 to get

Setting y = ax/b gives the equation y3 + y2 = ca2=b3 which could now be solved
by looking up the n3 + n2 table for the value of n satisfying n3 + n2 = ca2/b3. When
a solution was found for y then x was found by x = by/a. We cannot stress too much
that all this was done without algebraic notation.

Again a table would have been looked up to solve the linear equation ax = b. They
would consult the 1/n table to find 1/a and then multiply the sexagesimal number
given in the table by b. An example of a problem of this type is the following.

Suppose, writes a scribe, 2/3 of 2/3 of a certain quantity
of barley is taken, 100 units of barley are added and the
original quantity recovered.

It is not that easy to understand these calculations by the scribe unless we translate
them into modern algebraic notation. We have to solve

which is, as the scribe knew, equivalent to solving

This is why the scribe computed

subtracted the answer from 1 to get

and so x was found from

To solve a quadratic equation the Babylonians essentially used the standard formula.
They considered two types of quadratic equation, namely x2 + bx = c and
x2 - bx = c where here b, c were positive but not necessarily integers. The form that
their solutions took was, respectively

Notice that in each case this is the positive root from the two roots of the quadratic
and the one which will make sense in solving "real" problems. For example problems
which led the Babylonians to equations of this type often concerned the area of a
rectangle. For example if the area is given and the amount by which the length
exceeds the width is given, then the width satisfies a quadratic equation and then
they would apply the first version of the formula above.

A problem on a tablet from Babylonian times states that the area of a rectangle
is 1, 0 and its length exceeds its width by 7. The equation x2 +7x = 1, 0 is, of course,
not given by the scribe who finds the answer as follows.

Notice that the scribe has effectively solved an equation of the type x2 + bx = c
by using x = ((b/2)2 + c) - (b/2). Berriman gives 13 typical examples of problems
leading to quadratic equations taken from Old Babylonian tablets.

If problems involving the area of rectangles lead to quadratic equations, then
problems involving the volume of rectangular excavation (a "cellar") lead to cubic
equations. The clay tablet BM 85200+ containing 36 problems of this type, is the
earliest known attempt to set up and solve cubic equations. Of course the Babylo-
nians did not reach a general formula for solving cubics. This would not be found for
well over three thousand years.