The purpose of this handout is to facilitate your note-taking during lecture. This handout is not a comprehensive summary of the chapter; I will be giving additional notes during lecture which you will also be responsible
to know for exams and quizzes. Some of these examples come from examples and exercises in Calculus for Business, Economics, Life Sciences, and Social Sciences, 11th ed. by Barnett, Ziegler, and Byleen.

Range - The set of _______ of a function; i.e., the set of values obtained by substituting all input values into the
function.

Example 1 - Determining Algebraically Whether an Equation Specifies a Function
Determine which of the following equations specify functions with independent variable x. (Assume x represents a real
number in each equation.) 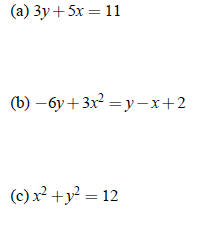 Example 2 - Identifying Functions
Which of the following graphs are functions?

NOTE: If a function is specified by an equation and the domain is not indicated, then we will assume that the domain
is the set of all real numbers that, when substituted for the independent variable, produce real output values for the
dependent variable.

Example 3 - Warm-up: Finding Domains
Find the domain of each of the following functions, assuming that x is the independent variable.

Example 4
Find the domain of each of the following functions, assuming that x is the independent variable. 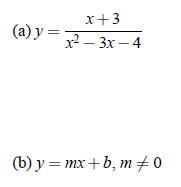 Find each of the following.

, where x and x+h are in the domain of f and h ≠ 0, is referred to as the difference
quotient and is studied extensively in calculus.

Example 6
Find the difference quotient for f (x) = x^2−4x+1 by finding each of the following.

Example 7
Acme Computer Company has a variable production cost per computer of $180, and has fixed costs that amount to
$45,000. Acme’s sales research department has established the price-demand function for its computers to be p =
−0.23x+574 dollars per computer. Using this information, find each of the following.

(d) Graph these three functions on the same coordinate axes. What do you notice?

(a) Write a function f in terms of x that gives a customer’s monthly bill.

Finding Intercepts of a Quadratic Function

• To find the x-intercept(s) (if any exist) of a quadratic function f , you have three options:

Example 1
Find the x and y-intercepts of the following quadratic functions. 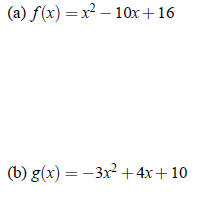 Example 3
Find the vertex, axis of symmetry, maximum or minimum value (whichever exists), x and y intercepts, domain, and range
of the quadratic function given in Example 1.

Another Method for Finding the Vertex of a Parabola
It can be shown using the method of completing the square that, given a quadratic function f (x) = ax^2 +bx+c,

Example 5 (adaptation of #58, pg. 92 of Barnett, Ziegler, and Byleen)
The market research department for a company that manufactures widgets established the price-demand function to be
p(x) = 2000−60x, where p(x) is the wholesale price per widget in dollars at which x widgets can be sold. This company
has fixed costs that amount to $4,000, and the variable production cost per widget is $500.

(a) Find this company’s break-even point(s).

(d) What price should the company charge per widget to achieve maximum profit?

Examples of Polynomials, Degree 1 through Degree 6, an > 0 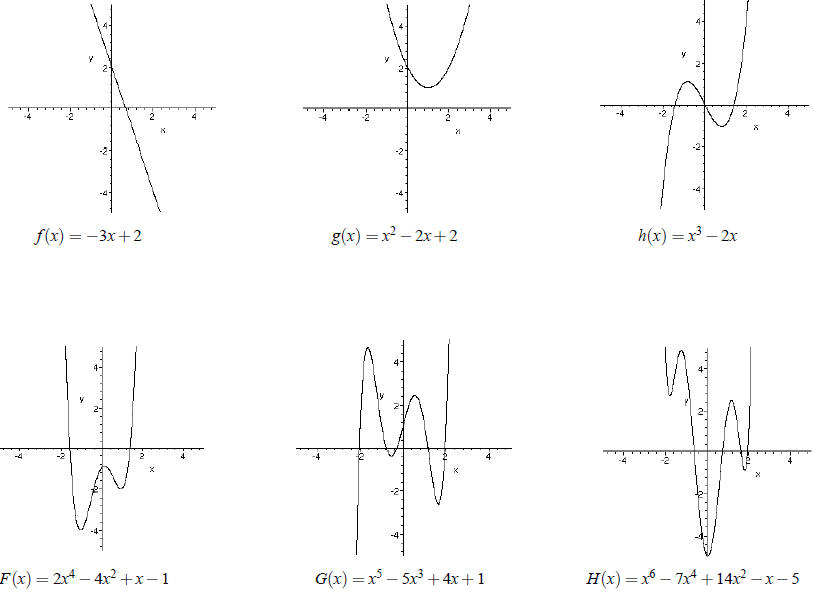 • For even-degree polynomials, both “ends” of the graph will go to

if the leading coefficient is positive, and both
“ends” of the graph will go to

Example 6
Find the domain of each of the following and state whether or not each is a rational function. 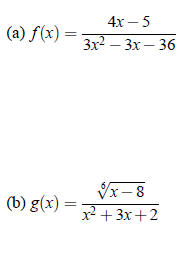