Review: exponents, bases, and negative and positive numbers raised to a power; also review the

→Product Rule: Multiplying two expressions with same base: Add exponents and use the

•So if we have two variables:

•What if we have

• Don’t try to include the number “2” in adding the exponents because it is not the same
base as the variable “x” and is not included in the exponent “3” (as it would be if it
were in parenthesis, i.e.(2x)3 - I’ll show you this in a minute.

→Power Rule: A power raised to another power is the base raised to the product of the
powers

→Power of Product Rule: The power of a product is the product of a power

•And we can put several rules together:

→NOTE: The above properties only work when we are dealing with multiplication of the
bases – they DO NOT work with addition of the bases

because exponents are a form of multiplication. The only operation
we have is multiplication, so we are just using the commutative property to do the
multiplication in a different order.

•BUT you cannot do this with addition: (a + b)r because this is a mix of addition and
multiplication and groups. We must do the group FIRST!

•Class work determine which property to use, then simplify: 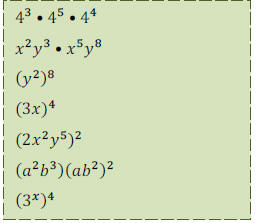 →Mixed Classwork: (or hand out worksheet?)

Break into groups and complete the following: 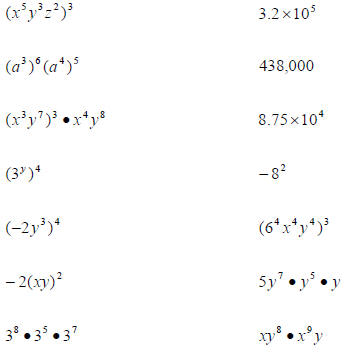