The prevalence of the complex numbers throughout the scientific world today belies their long and rocky
history. Much like the negative numbers, complex numbers were originally viewed with mistrust and skepticism.
In fact, the term “imaginary number” was a derogatory term coined by René Descartes, who found such numbers
unsettling. Just as with the negative numbers, however, history has shown that not only are the complex
numbers immensely useful, they can also have physical meaning, and hence are no less “real” than the real
numbers. Perhaps more importantly, they have given deep insight into a broad range of problems and become
an indispensable tool both for mathematicians and scientists in general.

Complex numbers first gained prominence in the 16th century, when Italian mathematicians Niccolo Tartaglia
and Gerolamo Cardano discovered formulas for the roots of general cubic and quartic polynomials. Surpisingly,
their formulas required the use of square roots of negative numbers, even when using the formulas to find real
roots of polynomials. You’ve likely encountered similar situations in your own studies when trying to find roots
of quadratic polynomials. Recall the following familiar theorem:

The quantity b2 − 4ac is sometimes called the discriminant of f, and written disc(f).

This example is not purely artificial. In fact, you might have come across this scenario when searching for
eigenvalues of linear transformations.

Example.
Suppose T : R2 → R2 is the linear transformation which rotates the plane 90°counterclockwise about the
origin. The matrix for T with respect to the standard basis is

The characteristic polynomial of this matrix is

By the previous example, it follows that A
has no real eigenvalues.

If we restrict ourselves to the real numbers, we see that not every polynomial has a root (and hence not every
linear transformation has an eigenvalue). This seems quite unfortunate, especially since the quadratic formula
seems to suggest what the roots (or eigenvalues) “should” be. To remedy this situation, we will enlarge our
collection of numbers to include some of these “imaginary” roots. We’ll start by simply adding

Definition. Let i represent a “number” which satisfies i2 = −1. We call i the imaginary unit.

We’ll now add i to our collection of numbers.

As a check, we compute

MatLab can natively work with complex numbers. For example, the above computation is entered
as follows:

You might be worried we will need to keep adding new “numbers” to our collection as we attempt to find
roots of polynomials of higher degrees. The following theorem, known as the Fundamental Theorem of Algebra,
ensures we won’t need to extend our collection any further.

In other words, when working with the complex numbers, every polynomial of degree n has n (not necessarily
distinct) roots. This theorem may seem more amazing in light of the fact there do not exist formulas for the
roots of general polynomials of degree five or more; that is, we can’t prove the theorem by simply writing down
the roots of a general polynomial and checking they’re all in our set C.

In general, finding the roots of a polynomial is quite difficult. Fortunately, MatLab can do this for us. First
we must define our polynomial. MatLab stores polynomials as row vectors, with components given by the
coefficients of the monomials. For example, to store the polynomial p(x) = x5 − 2x + 3, we enter

As predicted by the previous theorem, the degree five polynomial p has five complex roots.

Exercise 2. Use MatLab to find the roots of the polynomial p(x) = x4 − 2x3 + 1.
Since we’ll be working with the complex numbers, it will be useful to have a few additional definitions.

Example. MatLab has a built-in function for conjugation, called conj. For example:

By the above exercise, any equation involving the real and imaginary parts of z can be written in terms of z
and

This observation will be useful to remember when we discuss complex functions in Section 2.

It is often helpful to picture the complex numbers as lying in the plane, with the real part along the horizontal
axis and the imaginary part along the vertical axis. 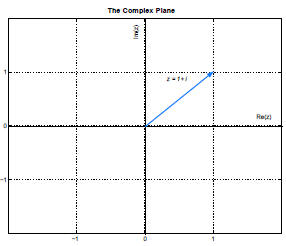 Unsurprisingly, this plane is called the complex plane. It was first described by Caspar Wessel in 1799,
although it is also sometimes referred to as the Argand plane and credited to Jean-Robert Argand. Use of
the complex plane was later popularized by Carl Gauss, and it was only after this geometric interpretation
was introduced that the complex numbers became widely accepted. The complex plane can be used to give
polar coordinates for z, with which one can deduce many beautiful relations. Unfortunately, this would take us
beyond the scope of the current assignment.