A linear function like f(x) = 2x − 3 or a quadratic function f(x) = x2 + 5x +3 are pretty generic. We have
the tools to determine what the graphs look like just by looking at the functions. Today, I want to start
looking at more general aspects of these functions that carry through to the more complicated polynomial
functions (e.g., f(x) = 2x4 − 3x3 + 7x2 − x + 11). Specifically, I want to look at what the graphs look like
on the ends, what they look like near the x-axis, and distinguishing aspects of the graph like bumps and
wiggles.

Let’s start with end behavior. We’ve seen this so far as the ends of the curves we’ve drawn that point up or
down and signify that the functions run off to positive or negative infinity

. In particular, we want to
describe how the functions behave for very large values of x.

If we look at each term separately, we get the numbers

We will say that x2 dominates x, when x is very large. Similarly, x dominates any constant. Notice that
the same thing happens for large negative numbers like x = −1,000,000. Out towards the ends of the graph,
therefore, f(x) = x2+5x+3 doesn’t look a whole lot different from f(x) = x2, and when we’re just sketching
graphs, they don’t look different at all. Similarly, the function f(x) = 2x − 3 looks a lot like f(x) = 2x for
large values of x.

On the other hand, if we have the function f(x) = x2+5x+3, this has the same end behavior as f(x) = x2,
so the ends will go up on both sides, as on the right side of Figure ??. I’ve given these a little curve upwards
to indicate that x2 gets bigger faster than x does.

I’m going to assume that you can factor quadratic expressions, at least in the simpler cases. I want to focus
on what information we can draw from the factorings. 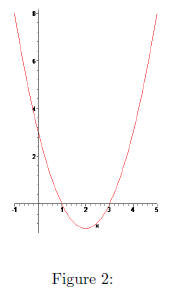 For very large values of x (both positive and negative), the magnitude of x2 is much larger than x, so it will
dominate to the right and left. The sign on the x2-term, therefore, determines whether the parabola will
open upwards or downwards.

For example, consider the function

which is the first function multiplied by −2. It will open downwards. In fact, we can factor as follows.

The x-intercepts are the same, x = 1, 3, but now everything is multiplied by a negative number, and that
turns things upside-down. Look at Figure 3. The 2 stretches everything vertically, so the graph also looks
skinnier.

The basic factorings give us three possibilities. If we shift the function function f up one unit, we get the
following.

Since both factors are the same, only x = 2 is an x-intercept. The x2-term is positive, so the parabola opens
upwards. The graph must look as it does in Figure 4, therefore.

If we shift the function up any higher, it won’t intersect the x-axis at all. This corresponds to the fact that
the function

does not factor over the real numbers. In fact, if we try to solve the equation x2 − 4x + 5 = 0 using the
quadratic formula, we get

We have to use imaginery numbers to find square roots of negative numbers. Anyway, the graph is shown
in Figure 5 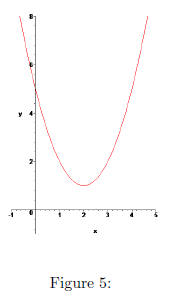 We can also multiply by constants to stretch and compress the graphs vertically, and multiplying by negative
numbers makes the parabolas open downwards.

Sketch the graphs of the following quadratic functions. For the answers, give the x-intercepts and whether
the graph opens up or down.

For each of the given functions, find the x-intercept(s) and the end behavior.